Constructed of Georgian style, red-brick in 1911, the sight of this four storey building will take you back to the beginning of the twentieth century.

In 1914, the town clock was installed, and began it's record of the past into the new millennium.

In 1987 a 72 cent stamp was made to commemorate the heritage value of the Battleford Post Office. 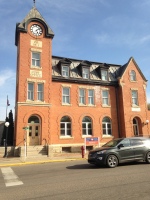 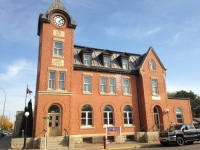